When a friend suggested that we go on a tour at Koval Distillery it didn’t take much for me to say yes. I love whiskey, so getting a chance to see how it’s made sounded like a good way to spend an afternoon (and $10). Koval is Chicago’s first (legal) distillery to open post-Prohibition. While the craft brewers began cutting through red tape about 15 years ago, craft distillation continued to be a bridge too far until 2008 when Robert and Sonat Birnecker opened Koval.

Koval began by producing five single-grain white whiskeys, which are much different than the aged whiskeys most people are used to. White whiskeys, as our guide mentioned, are better thought of in the category of other clear spirits like vodka. They have a much spicier and more forward taste than their aged cousins. In 2010, Koval started their aged whiskey line and they’ve continued to expand ever since.

We started our tour at Koval learning about the process of distillation and how Koval—and many other craft distilleries—differ from the larger distilleries. Koval uses the “heads-hearts-tails” method of cutting their spirits. For their whiskeys they only use the heart cuts instead of hearts and some of the tails. No one ever uses the heads, because that would kill someone. We also learned that all of Kovals spirits are organic and kosher. So if you’ve been looking for a whiskey to give your health-conscious Jewish friends, Koval is the place to go.

Once versed in the manner of production we got down to the business of tasting the whiskey. First up was Koval’s rye white whiskey. Peppery with a hint of sweetness, the white rye is definitely a change from the aged whiskeys I’m used to drinking. It’s much more palette forward and doesn’t have the same inner-warmth that an aged whiskey has. We also tried the Oat White Whiskey, which frankly didn’t taste like much. But I guess that’s the point, white whiskey is malleable and shaped by what else you put in the glass. The white rye is definitely a good starting point for a cocktail. 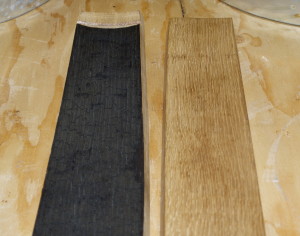 We moved on to the aged whiskeys and got a lesson in barreling. Most whiskey drinkers are familiar with the standard charred barrel, but Koval also produces a whiskey using toasted barrels. We tasted the Rye, Four Grain, and Bourbon whiskeys, all of which were quite good. The Rye and the Bourbon were good, but the Four Grain is where Koval has really hit the mark. It’s a balanced, well-rounded whiskey with a huge amount of flavor. The charred barrel is evident in the Four Grain as the sweetness hits first, followed by a hearty warmth expected from a good whiskey. The toasted-barrel rye was interesting, but I can’t say that I was excited by it. It definitely isn’t something I’d buy a bottle of, but I can see someone who’s looking for a softer whiskey enjoying it.

After our whiskey tasting we moved on to the liqueurs. We sampled three of Koval’s seven liqueurs, the Chrysanthemum Honey, Coffee, and Ginger. The Chrysanthemum Honey was sweet and could easily go in a cup of tea on a cold winter day. The Coffee liqueur didn’t smell very strong, but tasted like a sweetened cold-brew coffee. I’m thinking of using it to make some tiramisu. The Ginger was a bit of an odd drink, but being a liqueur I think it has the potential to shine in a few cocktails. On its own, it kind of tastes like the pickled ginger that comes with sushi. 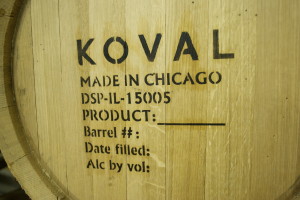 The tour at Koval is a great way to either begin to learn about whiskey or take your knowledge to the next level. The guide was very knowledgeable not just about Koval’s process, but how they differ from other distillers. Being able to taste all different kinds of whiskeys and learn about the distillation process for only $10 is a bargain. If your looking for a good way to spend an afternoon, put on your whiskey helmet and head over to Koval.

What: Distillery Tour
Where: Koval Distillery, 5121 N. Ravenswood Ave, Chicago, IL
How much: $10
When/How: Check out their website for tour times and reservations