DePaul University (the fine institution that pays my salary, but which neither sponsors nor endorses any of the content here on the blog) requires it’s incoming first-year students to take one of two courses: Discover Chicago—an intensive immersion program that uses the city and surrounding area as the classroom—or Explore Chicago—a more traditional classroom experience focused on Chicago.

My colleague teaches a Discover Chicago course called “Crime, Chaos, Culture, and Cosmos,” looking at various aspects of life and ideas of the afterlife in Chicagoland. When he asked if I would help him with his class for the day by driving a van full of students, I was initially hesitant, but when he told me where we’d be going (and that lunch would be provided), I agreed. Our itinerary would take us to Argonne National Laboratory, the Hindu Temple of Greater Chicago, the Lithuanian World Center, historic St. James on the Sag, the Zoroastrian Association of Chicago, and the Chicago Portage.

My trusty steed for the day was this stunning two-tone, 12-passenger van. If you’ve never driven a van like this before, it’s like steering a boat through pudding.

We set out for Argonne and promptly discovered one of the most Chicago things imaginable: traffic. I knew it was going to be a good day when I could demonstrate to these fine young people the wonder that is bumper to bumper traffic on the Kennedy Expressway. After this important introduction to transportation in Chicago, we arrived at Argonne for a tour of their campus and the Advanced Photon Source. We drove past the world’s fifth-fastest supercomputer and the under-construction Joint Center for Energy Storage Research, which sounds innocuous enough until you hear that their goal is to “ provide five times the energy storage at one-fifth the cost within five years.” Just take a second to think about that, five times at one-fifth the cost. How much cheaper will everything be because of that? A lot.

We arrived at our destination, the three-fifths-of-a-mile-long Advanced Photon Source, and went inside to get a closer look. The APS sends electrons at near the speed of light around in a circle and then smashes them in them into matter creating stupifyingly bright X-rays. These X-rays allow scientists from almost every discipline to study matter at it’s smallest scale.

One of the most interesting projects as far as I was concerned was the effort by engineers from Northwestern University to study the structure of bone in the hopes of understanding how to create stronger and lighter aircraft materials. The most amazing part of all of this is that as long as researchers agree to publish any findings, usage of the APS is free. Dan West, our Argonne tour guide had this to say about the research being done there:

“You can leave here saying, ‘I didn’t know that!’ But neither did anyone else last year.”

After our visit to Argonne we headed to the Hindu Temple of Greater Chicago, a sprawling complex just down the road from Argonne. At the Hindu temple we listened to a lecture on Hinduism’s basic beliefs and cosmology and then went on a tour of the temple. We visited the multiple deities spread throughout the temple and even got to see the washing of Ganesh in milk.

Next we headed over to the Lithuanian World Center, which is a combination community center, church, and school. Lithuanians moved to Chicago in large numbers and many eventually settled in and around Lemont, where the Center is located. We toured the outdoor art, including a small-scale replica of the Hill of Crosses, which houses somewhere in the neighborhood of 50,000 crosses. For the students, visiting the Hindu Temple and the Lithuanian Center provided a chance to reflect on the immigrant experience and how different ethnic groups carry on their traditions.

Our next three stops were rather quick. We made a stop at the historic St. James on the Sag Bridge Cemetery to briefly discuss the lives of the Irish immigrants that helped dig the Cal-Sag Channel. Then we were off to the Zoroastrian Association of Chicago, which is quite small, as there are only roughly 25,000 Zoroastrians in the entirety of North America. Our last stop was Portage Woods, the site of the Chicago Portage National Historic Site, where Pere Jacques Marquette and Louis Jolliet were introduced to Chicago in 1673. 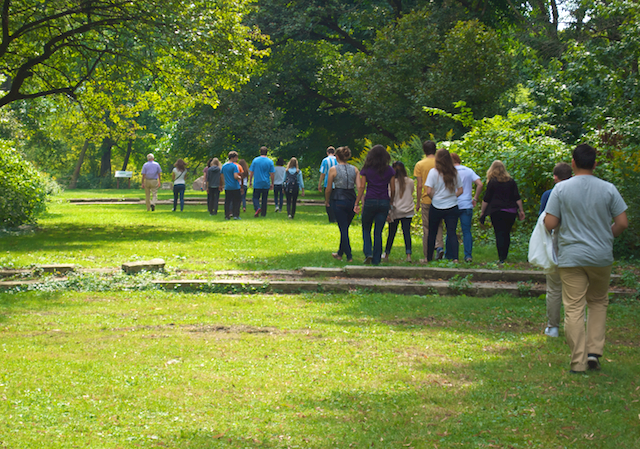 After enjoying nature for a bit and learning about how one portaged a canoe in 1673, we called it a day and headed back to campus. If the students learned half as much as I did and had half as much fun it was well worth the long day.