Every year one of the highlights of my summer is the Chicago Air and Water Show. For a few days the sky is filled with the thunderous roar of jet engines and the high-pitched whine of acrobatic prop planes. And for that weekend, seemingly everyone in the city becomes a bit of an aviation geek.

You can view all my photos from the Air and Water show here.

I try to make it to the Air and Water Show* every year, but this year was a bit special as I got to take part in the air show. On Friday before the actual show I rode along on the Flagship Detroit, something you can read all about on Airchive or watch video from the flight in this post.

In years past, I’ve been lucky enough to have a friend who lived in a high-rise building near the show, but he has since moved. So instead of viewing the show from 38 floors up, my friend Joe and I decided to view the show from the beach. Considering the show’s start time of 10am Joe and I decided we would be able to get a good spot for the show if we arrived around 8:30. While we did end up with a decent spot, there were already people set up on the beach apparently ready to house and cater a small army. By the time we arrived there were a number of multi-room tents and outdoor kitchens set up along the waterline. Next year we’ll have to come prepared with a 50 foot ladder and a food truck.

The show this year featured a number of parachute teams, civil acrobatic teams, and military aircraft demonstrations, all capped off by the Blue Angels.

The show began with a short display of American Airlines’ oldest and newest planes with the DC-3 Flagship Detroit flying in formation with an American 737-800. Quickly following was an acrobatic team and the Army Golden Knights, Navy Leap Frogs, and the All Veteran Parachute Team. 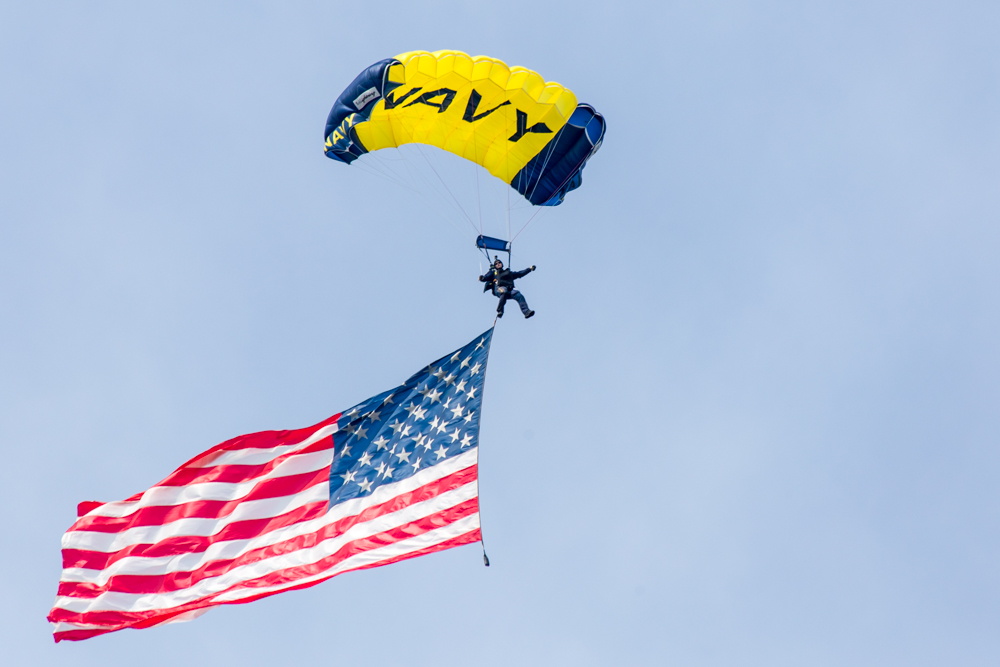 Much of the early portion of the show consisted of civilian acrobatic groups like the Aerostars, Team AeroShell, and Team AeroDynamix which features 12 different planes. 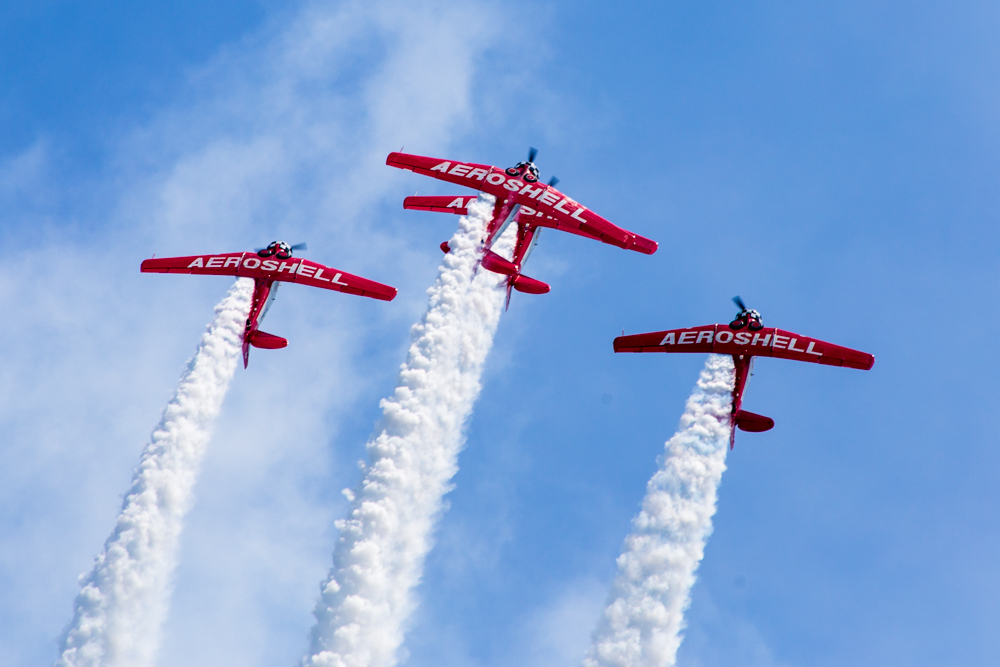 Also making an appearance this year was the V-22 Osprey. The Osprey, which recently joined the contingent of aircraft in the presidential fleet, is a tilt-rotor aircraft capable of operating much like a helicopter and airplane, depending on the necessity.

The parachute teams returned for a second jump after the Osprey’s demonstration and then it was time for the show to get a little louder. The F-22 Raptor performed and was joined by a P-51 Mustang for a heritage flight. 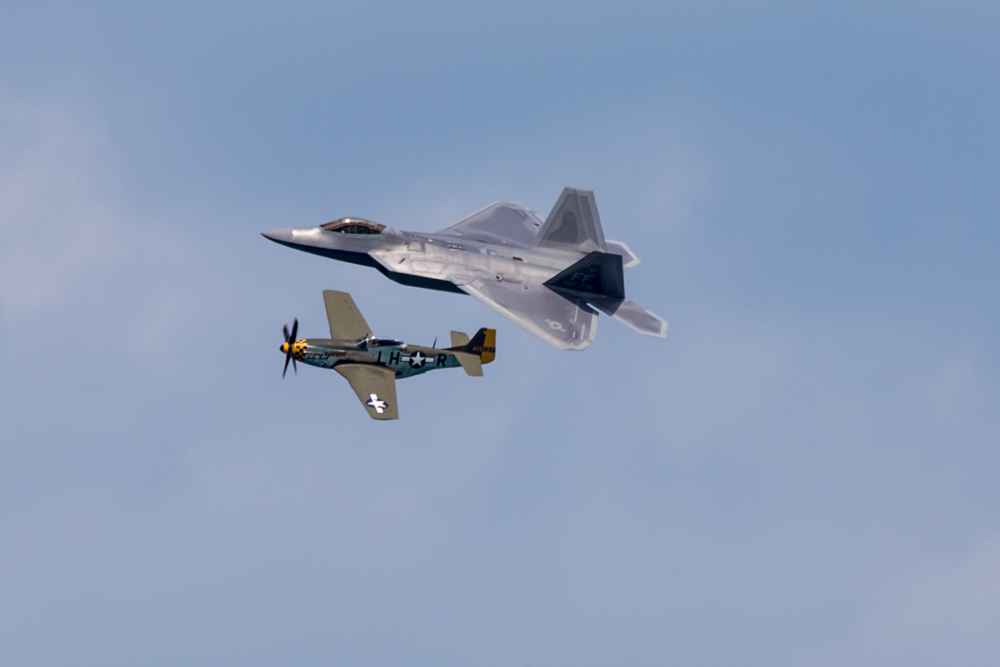 Closing the show were the US Navy Blue Angels. From where Joe and I were standing on the beach we had a great view of the soloist pilots as they screamed directly overhead. 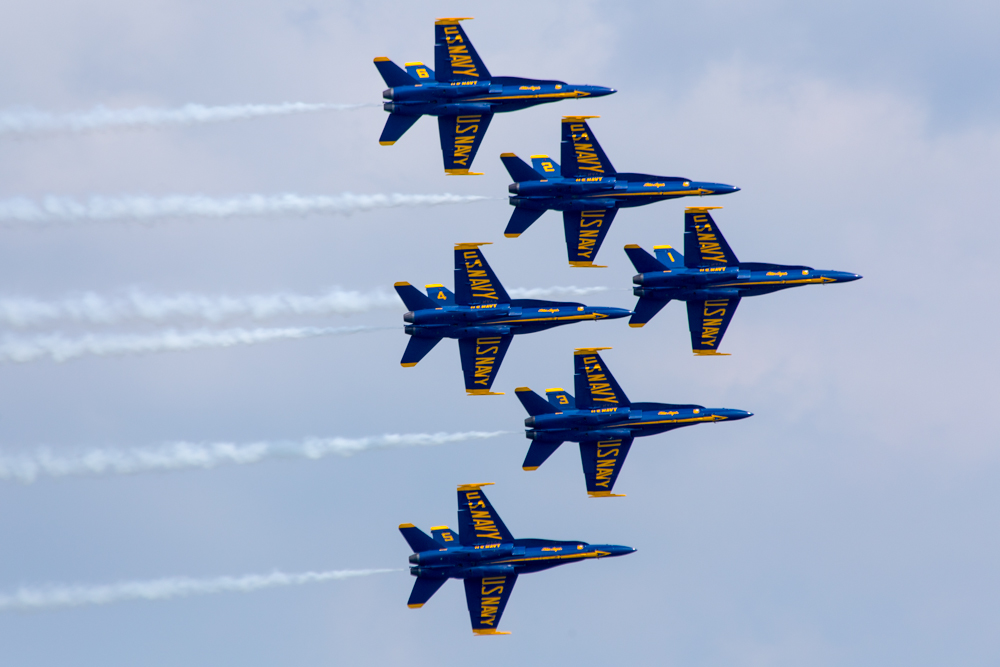 If you’re thinking about planning a trip to Chicago in August, coming for the Air and Water Show is something worth considering. It’s one of the best free air shows in the country and it’s a great time to see the city. Next year you’ll find me on the beach a little earlier. Stop by and say hello.

*It’s technically called the Air and Water Show and it does feature a few police and fire boats, but who are we kidding, it’s an air show.